WASHplus with local implementing partner ABMS/PSI improves hygiene conditions through behavior change and community mobilization in two peri-urban neighborhoods of Cotonou, the largest city of Benin. Wedged between the Atlantic Ocean and lagoons, Cotonou is floodprone and its slum neighborhoods experience cholera outbreaks during the rainy season. After promoting handwashing with soap and chlorination of household drinking water in 1,700 households, the pressing issue of open defecation came up time and again. The few public latrines are rickety structures built over the lagoons, but most residents prefer open defecation to these unsafe facilities. WASHplus connected with the provincial office of the Ministry of Health (MOH) responsible for sanitation in these zones to join in a first-ever (for Benin) experiment in community-led total sanitation (CLTS) adapted for peri-urban settings.

After adapting and testing CLTS tools for this new setting, all decision making and influential (social, religious, and governmental) persons from the two target neighborhoods were invited for an institutional “pre-triggering” prior to involving the entire community. They saw results of a simple survey situating the open defecation spots and public and household toilets. Community triggering was carried out on May 13. About 75 residents assembled in an open space, and two trained MOH facilitators led the group through the mapping exercise and a calculation of health-related household expenses. The Walk of Shame was not carried out as the event was far from the open defecation place. The result in urban areas is not necessarily a decision to construct latrines, and in this case, the group decided to create a special task force to follow up the decisions to destroy the open defecation places and work with the rest of the community to come up with solutions, especially concerning work with managers for the improvement of public latrines. The residents expressed a desire for modern toilets and said they were prepared to pay for them. 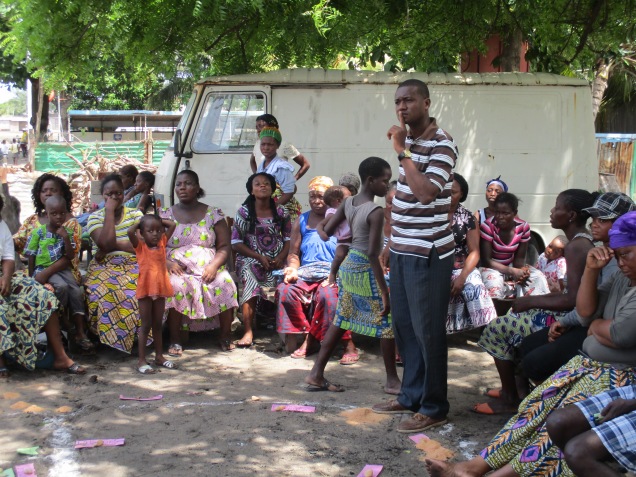 CLTS in this setting is different from rural settings, where the local chief has the power to convene and order people to implement decisions. These neighborhoods are extremely heterogeneous. Also, open defecation is forbidden by law, and the residents were reluctant to admit to the practice or to identify the open defecation places, thus the pre-survey came in handy. The participation of the “chef quartier,” the highest ranking local official, provided assurances that the decisions will receive strict follow-up. Plans are underway to replicate the triggering in the other zones of this very extensive neighborhood.