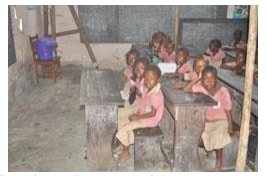 The Benin peri-urban program has taken a new turn by including schools in its efforts to fosteri mproved hygiene practices. Lack of latrines, drinking water and hygiene is acutely felt by the schools. The 10 schools in the pilot neighborhoods of Enagnon and Agbato showed great enthusiasm and engagement after intensive sessions with ABMS school activities coordinator Victoire Mongbo. Together, they agreed on criteria and terms for becoming a WASH Friendly School, and are now engaged in a WASH Friendly competition. Handwashing with soap and nicely maintained school yards are becoming the norm, however, the need for classroom drinking water containers stirred up controversy as the schools have no money and teachers in the public schools are not allowed to ask parents for financial contributions. Instead, the teachers gave lessons in the importance of safe storage and treatment of drinking water. To her surprise, one enterprising 10 year old, Claudine, proclaimed that the students should contribute to the purchase of containers for their classrooms. The students organized a committee and decided on a level of 25FCFA (pennies) each. Fourteen students promptly contributed. They eventually raised 1, 025F, by using snack money and also asking parents who were more than willing to help. This experience has reinforced the idea that children can be powerful motivators of parents when they themselves are convinced of the right action. WASHplus is also working with the school directors to come up with alternative solutions to school WASH challenges.

This first in a series of learning briefs WASHplus is producing in its final year documents the project’s WASH and nutrition integration programming efforts to stimulate the discussion and improve the evidence base as well as share experiences and approaches to integrating the two sectors at the global and country level. Download the Integrating WASH & Nutrition Learning Brief.